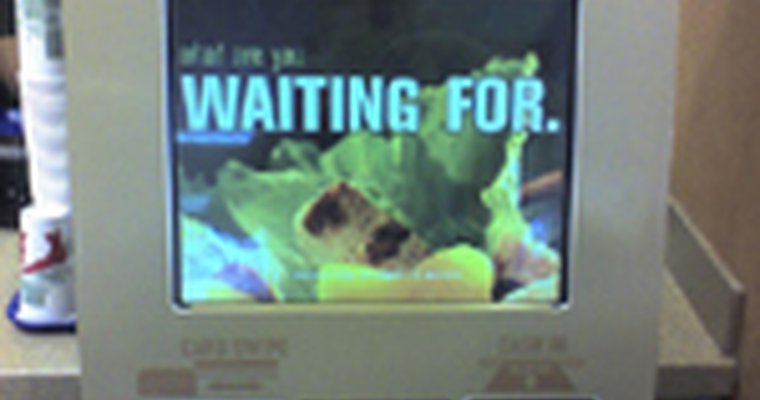 I like to imagine a world where I could get my standard fast-food order – a grilled chicken sandwich with only mustard and cheese –sans the eye roll and sigh from the teenager behind the counter or drive-thru. If only I lived in Europe, where McDonald's already has self-ordering kiosks deployed in more than 800 restaurants, I could be as picky as I want without feeling guilty. I could even pay with my debit card without help from employees, freeing them up to do more important tasks like make food –which would reduce customer wait times.

This sounds like a no-brainer, so why is this just now catching on?

Although restaurants have been slow to implement kiosks – restaurant and foodservice deployments represented only 3 percent of the nearly $600 million global kiosk market in 2009-- the trend is quickly changing. The Digital Screenmedia Association's 2011 study on the self-service industry, which included responses from more than 200 industry leaders, found that 21 percent of them planned to deploy self-service options in restaurants. That's up from the 2007 study that reported that less than 15 percent had those plans.

Consumers are embracing self-service technology now more than ever, according to a telephone survey polling more than 1,000 adults published in 2010 by Hospitality Industry.

"Some consumers may prefer self-service to face-to-face interactions because of the privacy, accuracy and personalization it can provide," stated the study.

More than half of all respondents said they would be more likely to choose a quick-service restaurant or hotel that offered self-service technology for ordering food or checking out of the property, compared to only 40 percent of respondents in the 2009 consumer survey.

The poll clearly demonstrated customer desire for kiosks in QSRs. Nearly half of the participants said they had walked away from a QSR due to long lines at least once during the previous year. And more than two-thirds said they were either "very likely" or "somewhat likely" to use a kiosk to order and pay for food at a QSR.

Kiosks in more than 200 Jack in the Box restaurants allow customers to control the ordering process, which leads to perceptions of better accuracy, said Michael Verdeska, interim-CIO and division vice president of the quick-service restaurant.

"The feedback we get from customers is very positive," he said in an interview that was part of the DSA study. "We actually get a higher overall satisfaction rating from the customers [using] the kiosk. Some of that, I honestly think, is due to order accuracy, since customers are in control of part of [the ordering process]. So whether or not [the orders are more accurate I can't tell you, but I can tell you the guests think it is, which is great."

NEXTEP Systems'self-service deployments at QSRs have increased by 50 percent annually for the past three years, said Tommy Woycik, president. The company has more than 1,500 installations, but many of those restaurants are in non-traditional locations, including airports, casinos and universities.

Woycik said one reason QSRs haven't embraced kiosks until now was because first-generation solutions were difficult to manage.

"They were not integrated with existing POS systems, creating redundant set-up and reporting challenges," he said.

Someone had to be first

Ken Duffy, self-service & loss prevention offering manager of IBM, said he's seen an increase in the company's self-service solutions at restaurants in the past two years and expects even more growth in the next two years. He thinks the trend is finally catching on now that restaurants, such as Jack in the Box and California Pizza Kitchen in the United States and McDonald's and KFC in Europe, have successfully deployed kiosk systems.

"A lot of QSR companies wanted to do it but none wanted to be first," he said. "Now that we have one or two case studies, we expect broader adoption."

Woycik said another reason for slow adoptions was that until recently many operators weren't prepared for such a significant change to their operation.

"Look how long it took for credit cards acceptors to get installed," he said. "Today, savvy restaurant owners understand that restaurant innovators are realizing double digit growth and record profitability through the strategic deployment of self-service options."

Woycik said now is the perfect time for QSRs to deploy kiosks.

"Costs are lower than ever, integration is easier than ever, consumers have come to expect self- service options, and we are living in a smartphone society where people are walking around with touch screens in their pockets every day," he said.

successful, despite some customers who said they wouldn't use kiosks because of concerns with them replacing jobs. However, the opposite has happened.

"We actually do not take any labor out of the restaurant," Verdeska said. "In our labor guide for restaurants that have kiosks, we want those restaurants to redeploy that labor to actually produce more food, which we do see in busy restaurants. We have actually increased the throughput of restaurants by having kiosks there, so managers actually end up getting more labor."

That increased production is related to how well the kiosks up-sell customers by better showcasing the menu, Verdeska said.

"When you order a combo, for example, and it asks you what side you want, there are a dozen different things you can get on the side besides french fries. We get a lot of comments from customers, saying, 'Oh, hey, I didn't even know that you guys sold those jalapeno hot poppers or that I could get a fruit cup or a salad with my combo meal. I never thought of that.' The kiosk really helps sell or expose the variety of our menu to the customers."

According to Verdeska, placing new products at the top of the kiosk queues also drives more sales than having cashiers recommend items.

"The kiosks also drive more combos," he said. They drive larger combos, so more large sodas and more large sides. It also drives more of our premium products, or the products we choose to highlight."

Although Jack in the Box executives are pleased with their self-service program, correct placement of kiosks is critical to future deployments, Verdeska said.

"It's very obvious that if you're near a college or something like that, all the students and younger people will use the kiosk and not the cashier, but that's not true when we reach out to other demographics. We're really trying to figure out exactly which restaurants will be successful with self-service. A lot of [success is determined by] culture and also demographics. We're really trying to crack that code so we can figure out all the right places to put kiosks."

One major challenge facing kiosk deployment at Jack in the Box, a 70-percent drive-thru business, is designing self-service options for the window.

"There are a lot of vendors who have some options," Verdeska said. "They have some kiosks that can move up or down depending on the height of your car and things like that. We haven't gotten into testing those yet."

One option Verdeska may explore is designing a smartphone application to allow guests to place orders in advance and pick them up at drive-thrus.

"Whether it's an NFC contact with technology or GPS technology or something that would automatically submit your order when you got somewhere or pulled into the drive-thru. So, that could possibly be a solution."

launches them in the U.S.

Most of McDonald's kiosks are located in France, where the concept was initially launched, said Agnes Vadnai, director of European communications at McDonald's Europe. "However, self-order kiosks are now being deployed also in Belgium, Germany, Switzerland, Austria, Portugal, UK and the Netherlands, with additional plans for roll-out in further markets in 2011 and beyond," she said.

What about McDonald's in the U.S.?

"While we are always evaluating new options, future plans have not been made," said Ashlee Yingling, U.S. media relations.

Come on, McDonald's U.S. What are you waiting for? Bring those kiosks to America, and watch as we picky eaters happily spend our money.