Teaming with Panasonic, a Texas Dairy Queen franchisee was able to install self-order kiosks that have resulted in higher tickets, consistently. 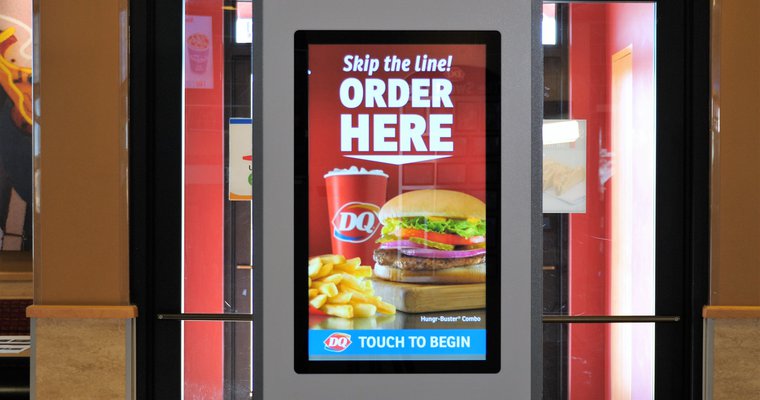 One of the advantages of buying a franchise is having established operating systems in place. No doubt, that was one reason that QSR veteran Michael Clarke bought a Dairy Queen franchise when he felt it was time to put his experience to use in his own business.

But Clarke, owner Lickety Split Food Services, a Dairy Queen franchisee in the greater Fort Worth, Texas market, wasn't one to wait when he saw an opportunity to improve his business using new technology. As described in part one of this two-part series, Clarke welcomed an opportunity to work with Panasonic System Solutions Co. of North America when the manufacturer wanted to work with him in developing a self-order kiosk.

As a result, Clarke became the chain's first franchisee to introduce self-order kiosks.

The installations were done in eight of Clarke's stores overnight in October 2018. Panasonic provided guidelines to Clarke's contractors. "We had them lit up and working within 24 hours," Clarke said.

Once the company introduced freestanding kiosks in the lobby, employees were assigned to assist guests on a dedicated basis.

With the freestanding units in place, the guest approaches the kiosk before they get to the service counter.

"I actually think it makes the environment more welcoming because of the choice of 'how I want to place my order,'" he said. "When you walk into our restaurant, one of the first things you'll see is that freestanding kiosk. The artwork is very inviting. It's delicious. It's cravable."

The average kiosk ticket is as much as 35-40% higher than at the cashier station, Clarke said. The average kiosk ticket is about $13.25 compared to $8.95 at the counter, although it varies by season and special offers. The increase has been consistent in the 18 months the kiosks were installed in all the restaurants. "Our customers just choose to linger longer and order more at the kiosk," he said.

It was important to address public perception of kiosks taking peoples' jobs. "We heard those types of comments from customers," Clarke said. Some said they were choosing not to use the kiosk in the interest of saving someone's job.

Managers met with the staff to explain there would be no reduction in labor. "The service personnel are no longer relegated to that position of an order taker," he said. "Instead, they're promoted to more of a concierge position where they can be involved in exceeding the customer's expectations when it comes to hospitality or giving them assistance." Labor remains the same percentage of sales prior to introducing the kiosks.

The percent of dine-in transactions has reached 15%, meeting the Clarke's goal.

"If the demand grows, then we would look at other kiosks," he said.

Clarke declined to reveal financial information about his investment. However, his cash flow to meet his financial objectives over a 2- to 5-year period was based on achieving 15% of the transactions on the kiosk and a 35-40% average ticket increase.

"That would more than pay for and fund the kiosk initiative," he said. "It's a self-funding model."

Paving the way for other franchisees

"New franchisees who adopt these, they don't have these hurdles anymore," he said. "They have now a turnkey system to just begin using."

The kiosk will be able to accept the Dairy Queen mobile pay option which the company plans to introduce later this year, Clarke said. The kiosk will also be able to integrate the loyalty rewards program.

A spokesperson for Dairy Queen said the company is not exploring a kiosk for its franchisees at the present time, and did not wish to comment further.

As for Panasonic, "They were just an exceptional partner," Clarke said .